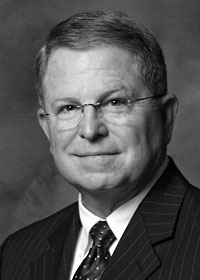 Travis Beard began his career in the Little Rock School District. While attending Central High School he was a member of the All-State Band and first chair clarinet in 1966. He continued his training at Arkansas Tech University where he earned Bachelor’s and Master’s degrees in Music Education. After basic training in the US Army in 1970, he was transferred to the Arkansas National Guard Band and was able to begin his teaching career as Assistant Band Director at both North Little Rock Ole Main and Northeast High Schools. After serving two years at Poplar Street Junior High, Travis accepted a position with the Russellville schools, serving as sophomore director until 1988. The Sophomore Band at Russellville High School was the first of its kind in Arkansas. He continued as Symphonic Band director until 2004. During this time the Russellville High School Band appeared in the inaugural parades of both Presidents Carter and Clinton, as well as the Cotton Bowl parade in 1980. He continued his teaching career at the Russellville Middle school until his retirement in 2009.

Travis and Debbie were married in 1970 and he credits her with providing a loving and supportive home for their family. They have three children; Melanie O’Patry of Los Angeles California, Emily Durham of Ft. Smith, and Andy Beard of Little Rock.

Travis credits his Mother for giving him the gift of music and the discipline that it takes to be successful in music and in life. He credits his Father as a role model in leadership.